Skyline Commercial REIT is branching into a new area after agreeing to purchase 11 Western Canadian dealership properties from Cervus Equipment Corporation for $55.7 million. 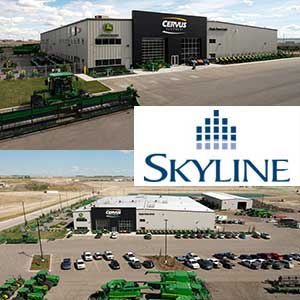 “The properties are spread across Alberta and Saskatchewan, but the lion’s share of the value in the deal lies in Calgary, Saskatoon and Regina,” said Skyline Commercial REIT president Michael Mackenzie.

Cervus will lease back the properties it’s selling to Skyline Commercial REIT in a deal that’s expected to close this month. The properties total about 350,000 square feet and the initial lease terms average 18.5 years.

“From Cervus’ standpoint, this allowed them to access equity it had tied up in the real estate for their own internal business purposes,” said Mackenzie. “From our standpoint, we were able to structure a long-term income stream.”

Cervus trades on the Toronto Stock Exchange and has interests in 73 dealerships in Canada, New Zealand and Australia. It already leases the rest of its Canadian properties not involved in this sale.

The privately owned Skyline Commercial REIT is part of Skyline Group of Companies along with Skyline Apartment REIT and Skyline Retail REIT. It was launched in 2012 and has doubled in size over the past two years in an environment that’s been challenging for several Canadian real estate investment trusts and where competition can be fierce for new acquisitions.

“The fund is now worth about $500 million after starting with about $240 million in acquisitions of assets that were primarily in Ottawa and Toronto and had a large number of small tenants in them,” said Mackenzie. “That was great to start out with, but the strategy for the last year or two has been to buy a lot of long-term, single-tenant income streams in newer buildings.”

Skyline Commercial REIT’s last purchase before the Cervus deal was a 54,184-square-feet industrial property in Brampton, Ont. that it acquired for $9.1 million in September. That gave it 71 properties, with more than 4.9 million square feet of commercial space, in 20 Ontario and Quebec cities.

“We’re in a strong cash position so our next number of acquisitions that we make, including the ones we’ve done this year, are basically being paid out in cash,” said Mackenzie. “We’re not diluting for current acquisitions.”

“We spent a lot of time with Cervus developing this structure and, now that we’ve done it, we know that there are other successful organizations out there that may benefit from the sale of their real estate portfolio to redirect their equity to their core business,” he said. “We’d like to talk to them because this could be an interesting and continuing story for us.”

Skyline Industrial REIT (the “REIT”) is a privately owned and managed portfolio of industrial properties, focused on acquiring warehousing, distribution, and logistics-centred properties along major highway corridors and transportation routes in Canada.

Skyline Industrial REIT is committed to providing outstanding places to do business and superior service to its tenants, while surfacing value with a goal to deliver stable returns to its investors.

Skyline Industrial REIT is operated and managed by Skyline Group Of Companies.

As a result of the REIT's increasing focus on modern warehousing and logistics assets, Skyline Commercial REIT has changed its name to Skyline Industrial REIT to better reflect its portfolio composition and target sector.